Nicholas Conaxis was twenty years old when he was killed in Vietnam on May 5, 1968. He had led a difficult life. Deprived of parents at the age of one, he lived in foster homes for the next thirteen years, and for four more years he lived in a group home for teenage boys. He was funny, sensitive, friendly, and mischievous, while he endured anxiety and insecurity for his entire life. Drafted by the army in 1967, he wrote many thoughtful and sensitive letters from military training, criticizing military life, the war, and social conformity. He read widely as he explored values and philosophies of the 1960s. His letters from Vietnam showed concern for the Vietnamese children, the people, and the land around him. Nick overcome a hard life, reached out to people, and wrote honest and thoughtful letters under extreme conditions. 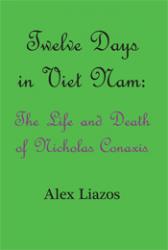