The Family Tooth by Ellis Avery

BEFORE YOU CONTINUE SHOPPING, PLEASE NOTE!

On a temporary basis, beginning on April 2nd, your online book orders with Harvard Book Store will be processed and fulfilled by our partners at Bookshop.org/shop/HarvardBookStore. Please use this link to shop for books.

During this time, we will not be processing book orders placed here on shop.harvard.com.

You can still support Harvard Book Store with book purchases during this time! Shop our recommendations and reading lists (or search the database for more available titles) on bookshop.org/shop/harvardbookstore—30% of all sales from this link will go to Harvard Book Store. Read more about the temporary switch here. THANK YOU!

At the beginning of 2013, hard on the heels of her mother’s death and a cancer diagnosis, Ellis Avery was stuck in a mobility scooter, crippled by an autoimmune condition called Reiter’s Syndrome. Named by Kirkus one of the Best Indie Books of 2016, THE FAMILY TOOTH is a cancer story sandwiched inside a grief-and-food memoir, but more than that, it’s a story of hope and, ultimately, triumph: it tells the story of the medical and psychological sleuthing that enabled her to walk again by the end of the year.

The thread that pulls this whole book together is food, both in terms of the dietary changes that helped Avery out of the scooter and onto her feet and in the way that she comes to recognize her mother’s appetite in her own. She begins the book unsympathetic to her mother’s alcoholism, and, through learning both that she can control her pain through diet and that not eating what she wants (day after day, eleven hundred meals a year) might be the hardest thing she’s ever done, she discovers a deeper compassion for her mother than she’d previously imagined.

Along the way, this memoir shows a queer marriage of thirteen years weathering the stresses of grief and illness with as much grace as possible, rising to the occasion of mortal fear with a wedding at City Hall.

Three of the fifteen essays from THE FAMILY TOOTH are available individually from Kindle Singles, and several have been published in online venues such as Buzzfeed, Guernica, and The Intima: A Journal of Narrative Medicine. For more information about this book, please visit ellisavery.com.

Ellis Avery writes from the depths of loss and fear with emotional precision and visceral sensuality. But foremost, it’s her ability to attain a graceful, benevolent perspective on it all that makes these essays soar.
--Alison Bechdel

Ellis Avery uses her novelist's powers to tell the true story of her life in crisis. She faces her mother's death and her own near-death with an artist's intelligence and imagination--and humor. Reading these essays brings tears of grief and laughter.
--Maxine Hong Kingston

THE FAMILY TOOTH is a gorgeous book. It makes poetic, profound, and clear-eyed use of the author's devastating illnesses to shed light on her tempestuous relationship with a very difficult mother. It’s honest, detailed, compelling, and intimate without being self-aggrandizing or self-pitying. Avery has pulled off an incredibly difficult, triple-axel, triple-lutz literary combination with spectacular skill and grace.
—Susan Jane Gilman

A sharp, tender memoir about illness, daughterhood and food… Fiercely self-questioning and intelligent, curious even in the face of her own suffering, Avery comes to see the roots of her mother’s parenting in long-untreated pain.
—Donna Minkowitz 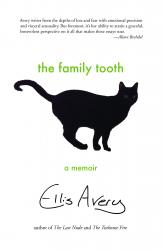