The Mueller Report was released on April 18, 2019 by the United States Department of Justice. This 454-page edition was produced at Harvard Book Store and printed on our in-store book machine, Paige M. Gutenborg, within hours of its release.

This edition includes both volumes of the report, bound as a single volume.

And just a few notable tweets

"I have just finished reading The Mueller Report and, my old bookseller genes awoken, urge everyone to read it. The writing is sharp and clear. The report is filled with drama and direct quotes. There are unexpected heroes. There is terrible darkness and depravity. Mystery. The legal explanations do not require training to understand. It is indeed a page turner. Once you start to read it, you won't want to put it down." —Suzy Staubach, "The Mueller Report: 'A Page Turner,'" Shelf Awareness

"Part spy thriller, part Game of Thrones with footnotes... The qualities of [Trump's] tenure that have destabilized and degraded our government are the same qualities that make them entertaining after the fashion of reality TV: escalating conflict, ruthless maneuvering, larger-than-life-characters, knee-jerk stereotypes, dramatic reversals.... The Mueller report, Olympian and meticulous, feels like an attempt to wrest back our government on behalf not just of real lawyers but of reality itself." —Laura Miller, "A book critic reviews the Mueller report as literature," Slate 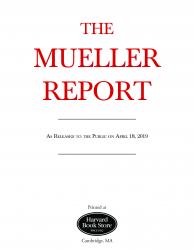